THE NOBILITY OF A POOR WOMAN’S SOUL

And Christ looked up and saw the rich putting their gifts into the treasury, and He saw also a certain poor widow putting in two small coins. So He said, “Truly I say to you that this poor widow has put in more than all;  for all these out of their abundance have put in offerings for God, but she out of her poverty put in all the livelihood that she had.”                  – Luke 21:1-4

This momentary comment by the Lord I find so significant, so powerful, so insightful.  This commentary on rich people and a poor widow shines light on the essence of holy devotion, on the struggle of the poor, on the arrogance of the rich and privileged, and on the significance of sacrifice in the Christian ethos.

Through the years as I have relived this passage I try to discern the feelings of Christ.  Was Christ feeling sadness in seeing her sacrifice being squandered in support of a self-glorifying project of this overblown Temple?  Was Christ disappointed in how the rich were seen as giving when it was the widow who was actually giving more?  Was Christ inspired by the widow’s humble yet noble devotion?  Was Christ frustrated at how powers that be favored the rich and ignored the poor? 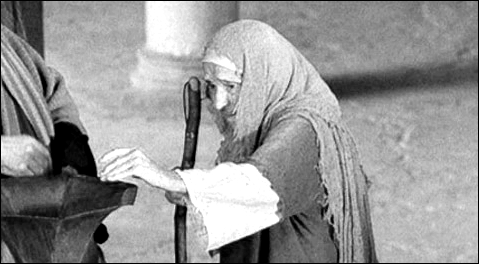 Through the years, I have experienced so many moments like these.  Now and then, a well-to-do parishioner would make a spectacle of a “gift” to the Church and sometimes we placed a plaque on the wall.  But now and then, as was often the practice in years gone by … when I would visit a homebound widow she would always hand me an offering envelope with change enclosed.  Looking back … the widow’s envelope was a far holier event than watching the rich man unveil his plaque.