FOR THE SAKE OF THE WHOLENESS

After the parable of the lost sheep, Luke has Jesus continuing on with a parable of further explanation … “Or suppose a woman has ten silver coins and loses one. Doesn’t she light a lamp, sweep the house and search carefully until she finds it? And when she finds it, she calls her friends and neighbors together and says, ‘Rejoice with me; I have found my lost coin.’  In the same way, I tell you, there is rejoicing in the presence of the angels of God over one sinner who repents.” – Luke 15:81-10 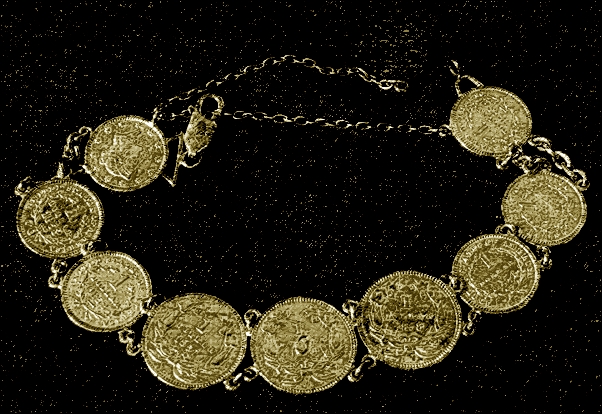 I am told that the ten coins may refer to a necklace of coins, with the ten coins making a complete set.  And if that be the case … I think Jesus is extending the theme of why we go about helping the lost to be found.  In the story about the lost sheep, I noted that this story speaks of the Christian ethic about the significant worth of the individual, an ethic which goes counter to the ethic found in much of worldly philosophy, possibly even against common sense.  Here, I believe, Jesus is adding another dimension about why we search for the lost so that they might be found … and that dimension is restoring the wholeness of the community.

The necklace of coins was in need of that one coin that made the necklace whole.  It is the story of a desperate effort to restore wholeness to that community of coins. It is the teaching that completeness has a worth even beyond the total of the parts.  Community itself, wholeness of the whole, the full set of the individuals, has value in itself.

But the Church through the centuries has often been unwilling to preserve the whole.  Too often if one coin is lost they simply do without.

We live in times when the temptation to divide the community is great.  Oh, it is usually coached in terms of conscience, and that, at times, must be.  But as I observe these times, selfish pride and self-righteousness are more at work, along with a measure of tribal vindictiveness.  But the well-being of the whole does matter in the eyes of Christ … and so we go searching for that one lost coin.  It goes against common sense and long-term strategy I suppose … but it does seem to matter to the Lord.