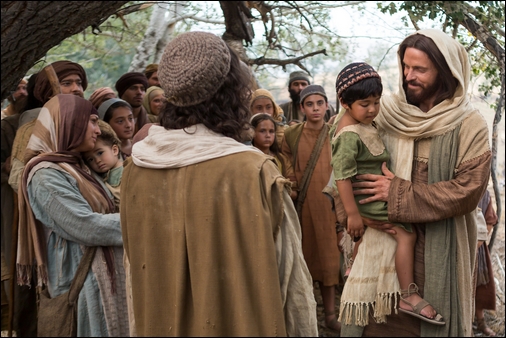 “For the least among all of you is the greatest.” I find irony here.  What if this teaching of Christ applied not only to Christians and Christian communities, but also that nations that claim they are a Christian nation?

Christ confronts the egotism of the disciples competing with one another for leadership with the metaphor of a child … a beckoning to a near universal response of both caring responsibility and natural affection … as a child.  It is a call to innocence; it is a call to further growth; it is a call to dreams not yet fulfilled; it is a call to renewal of both hope and possibility.  “Toss your culturally enflamed egos aside and become as children.  We are not to be about climbing to the top and lifting the bottom.  We are not about the rich and the powerful and making them all the more so, but rather about the poor and the powerless and lifting them up.

But alas, now and in past centuries, Christians has rationalized away this clear and simply teaching of us … for the least of you shall be the greatest.  We are to be people of humble servanthood.  Yet … so many of us are still driven by worldly ambition and keep arguing,  “Which one of us will prove to be seen as the greatest?”  And we do so because it IS SO VERY NATURAL TO DO SO.

Christian as servant, Christian community as servant, and if there were such a thing, Christian nation as country of servants, it is part of Christ’s definition of what it means to be a Christian disciple.  But instead of humility … we delude ourselves into thinking that financial prosperity and military might are the measures of greatness.