WE HAVE NO KING BUT CAESAR!

When Pilate heard these words of the Jerusalem leaders, he brought Jesus outside and sat on the judge’s bench at a place called The Stone Pavement.  Now it was the day of Preparation for the Passover; and it was about noon. He said to the Jerusalem leaders, “Here is your King!” They cried out, “Away with him! Away with him! Crucify him!” Pilate asked them, “Shall I crucify your King?” The chief priests answered, “We have no king but the emperor.”  Then he handed him over to them to be crucified. – John 19:13-16 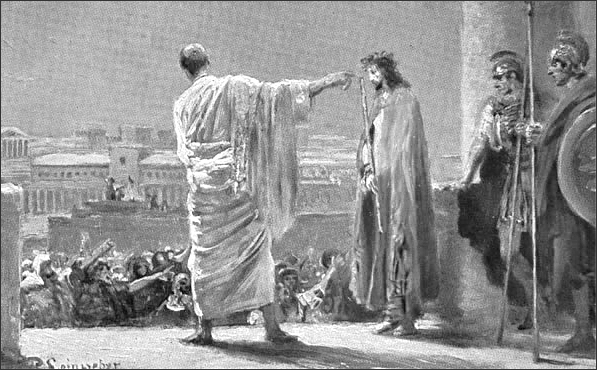 And so was the final step in the abandonment of conscience and principle by the chief priests, … “We have no king but Caesar!”  In that time and place, such a declaration was both heresy and treason.  But this is what happens when zeal and passion savages a conscience, the rage and the fear slaughters the soul.

So fearful of losing their control over Jerusalem to an inspiring rabbi from Galilee, their desperation lures them into an ungodly solution.  So accustomed to their cozy relationship with the Roman governor in charge of the occupation forces, they forced his hand to preserve their own survival.  So political was the moment that both Pilate and the chief priests abandoned all sense of justice for the sake of controlling the crowds.

This would not be the last time when supposedly holy men colluded with worldly powers to control the circumstance and the people.  Throughout Church history when politics and faith entered into collusion even for seemingly holy causes … corrosion began to eat away the soul, leaving but a loss of conscience  and innocence and a corruption of heart and ways.

Loved Ones, it is still happening.  Let not your conscience be intimidated by fear and rage.