Is Christ being portrayed accurately in our times?

And Christ said to all, “If anyone would come after me, let him deny himself and take up his cross daily and follow me. – Luke 9:23

Tis the great change in course in one’s life when one becomes a follower of Christ, one is no longer the center of the universe, now Christ is at the center.  At least, He ought to be, but often this is not the case with those who claim Christ as their Lord.  Too much ego, too much pride, too much placing one’s self at the center of all things.

We live in an age of “Ego”.  We are urged to be the winner, to be the star, to be the greater than those lesser souls.  We measure the success of our lives in getting ahead, in rising to the top, in making a name for one’s self.  Far too often, we only see the world from our own perspective.  Far too often, we try to control the world to meet our interests.  This is the religion of the demi-god named “Ego” and not the Way of Christ.

Contrary to how Christ is falsely portrayed by those who try to sell a self-serving Gospel, Christ was and is an internationalist.  There is not a Christian nation but only a Christian Realm.  The Providence of the Lord extends beyond Man-made borders.  In Christ, we have concern for brothers and sisters all around the world, their well-being is as important as my own, possibly even more so. 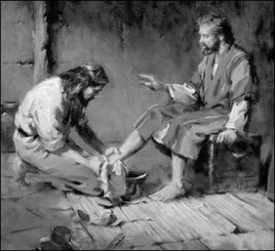 Contrary to how Christ is falsely portrayed by those who try to sell the faith as a means of sanctified greed and self-centeredness, Christ was and is a humble servant.  They called Him King but he declined a crown of gold and accepted a crown of thorns.  They called Him Master and Lord but He chose to wash the feet of His disciples whom He embraced as Friends.  They called Him the Son of God yet He emptied Himself…“He made himself nothing by taking the very nature of a servant, being made in human likeness.” (Philippians 2:7)

We find ourselves in a society that is more devoted to the demigods Ego and Pride than to humble servant who offered Himself in Love for all people no matter their nation, their ethnicity, their status.  And our society is suffering from the consequences of a false portrayal of Christ.

Always in His Service,

1 Response to THE TRUE CHRIST